The language requirement in the College of Arts & Sciences helped ShawnaKim Lowey-Ball ’05 discover a culture that’s become her life’s work.

Lowey-Ball, who came to Cornell with interests in physics and cognitive science, was already fluent in French, so she decided to venture in a completely different direction to fulfill her language requirement — Indonesian.

“I wanted a language class with the fewest students,” said Lowey-Ball, today an assistant professor in Southeast Asian studies at the University of Utah. “There were only four of us so I learned the language well,” at the same time discovering Cornell’s treasure trove of Southeast Asian resources and opportunities for undergrads interested in studying the region.

“I realized when I went to grad school that my intellectual community was already fairly broad because of my experiences at Cornell,” she said. “For example, George Kahin is a major figure in Southeast Asian history. I already knew about him. I had studied at the Kahin Center.”

Lowey-Ball spent a summer in Indonesia after her junior year and found that the country fascinated her, she said, because although it’s the fourth most populous, it’s still somewhat of a mystery to most people. She ended up in the College Scholar Program at Cornell, where she combined her interests in history, politics and Southeast Asia. Her senior thesis focused on Indonesia’s Petrus Killings, a series of government-sponsored executions of criminals that took place in the 1980s under President Suharto.

“People would wake up and find a dead body outside a cinema or a news stand,” Lowey-Ball said. “The government was under pressure to do something about crime, so the vast majority of those killed were recognized as thieves and gangsters.”

(Lowey-Ball in 2004 during her first trip to Indonesia as an undergrad.)

Though the killings caused great fear in Indonesia’s criminal underbelly, the public was largely supportive because they did see a lowering of the crime rate, she said.

After a stint working at a New York City hedge fund right after graduation, Lowey-Ball returned to grad school and today teaches and studies the politics and history of Indonesia in modern times, as well as during the 15th and 16th centuries, the time period she focused on for her dissertation at Yale.

Her two current research projects reflect this dichotomy – she’s at work on a paper based on her undergrad thesis, while also researching the Malaysian port city of Malacca in the 1400s and the role China played in that city’s growth.

“In 1400, Malacca was a lazy fishing village, but in 100 years, it became this incredibly wealthy trading state where 89 languages were spoken on the streets,” she said.

Spices played a role in the transformation, as Indonesia’s nickname of “Spice Islands” implies, but its location between China and Europe also made it a key stopping point for ships, who relied on wind power and had to often wait six months or more in this region for the winds to shift. China sent many such “treasure fleets” of thousands of sailors, who ended up building a barracks in Malaysia and making the city a wealthy port.

At Utah, Lowey-Ball teaches classes on global Islam, as well as Asian and Southeast Asian history, opening the eyes of her students to the hundreds of millions of people living in democratic Muslim countries.

Some of her students are Mormons, who have actually been to the countries they’re studying as missionaries, she said, while others are American history buffs wanting to know more about America’s involvement with leaders like Marcos and in countries like Vietnam.

For Lowey-Ball, studying the region continues to satisfy her own curiosity to learn about other cultures.

“There are very few places in the world where if you get to a remote island you can really experience another culture,” she said. “Indonesia is one of them.” 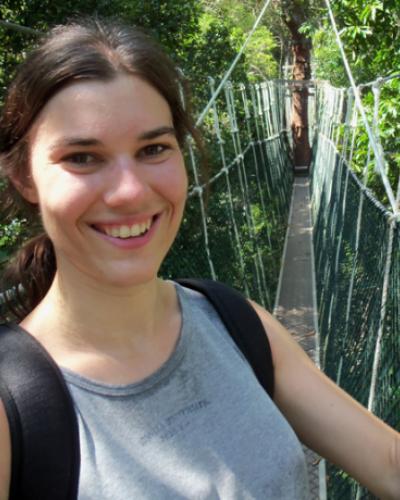