Horner ’14 gets foot in door at entrepreneurial venture

You never know from where the next great idea will be sparked. Just ask Carolyn Horner '14, who co-founded a mobile-first children's shoe-sizing company on a whim spurred from rural China.

While double-majoring in government and Asian studies in the College of Arts & Sciences, Horner knew she wanted to go abroad after her graduation. She joined Teach For China for two years and found her way to Yunnan – a province closer to Mount Everest than the Chinese capital of Beijing. While getting a world's view she desired, Horner was teaching English in schools that wouldn't otherwise have access to that sort of education.

Many modern conveniences were scarce. Horner was living in a village with no running hot water and only limited access to electricity. Efforts to shop were challenging, at best. Trying to return goods? Even worse.

"I was constantly buying things online that wouldn't fit, and I couldn't go to the store in my town because nothing fit me – especially when it came to shoes," Horner said. "They would just look at my feet and think I was from a different planet. So I had to shop online, and I was constantly dealing with returns. It was a really frustrating process."

And so, powered by a quip made on a dirt tennis court in Yunnan, Horner and co-founder Eve Ackerley took back to the United States the idea to start what has now become Jenzy. Four years later, the Philadelphia-based company has expanded to eight full-time employees and has more than 65,000 customers using its platforms.

At the core of Jenzy (which is word play on Generation Z) is an app that helps parents find the right fit for their kids' shoes. By sending a picture of a child's foot, Jenzy's team works with 65 brands to find properly-fitted options and purchasing opportunities. Multiply the amount of time saved in that process by the frequency in which small children size out of shoes, it's easy to understand Jenzy's niche.

The idea of delving into shoes was immediate – the involvement with children's shoes came a little later. The original idea of working with women's shoes quickly evolved when many of the women being canvassed, who were also mothers, expressed marked frustration about equipping their kids with footwear.

It may seem like a big leap for Horner to make from her studies to eCommerce, but she and Ackerley both had parents that successfully built businesses from the ground up. Horner also realized there were quite a few similarities between her original dream and her new one.

"Growing up, I always wanted to be in the (Central Intelligence Agency). That was my dream," said Horner, Jenzy's chief executive officer. "I really loved diplomacy and really thought that was going to be the path that I would take. But I kind of just fell into entrepreneurship, because a lot of the same skills that I just naturally gravitate toward – whether it's team-building or problem-solving – are really complemented by entrepreneurship."

Not surprisingly, those same attributes can be traced to the core of successful student-athletes. Count Horner as a member of that club, highlighted by All-Ivy League first-team selections in 2012 and 2013 and a spot on the Mideast Region All-America second team in 2012. When her collegiate career concluded, she ranked second on the program's all-time record list for shutouts (eight), fourth in winning percentage (.548) and seventh in victories (17).

From those days on Marsha Dodson Field, Horner's time in Yunnan offered plenty of opportunity for exercises in ingenuity. It became a way of life for Horner and Ackerley, who – as Horner put it – "couldn't spend free time watching Netflix."

"We had to spend our free time talking to each other," she said. "So as you can imagine, our conversations could really spiral out of control. Things like trying to make an entire Thanksgiving dinner in 20 different rice cookers. We would love solving those challenges and figuring out how to get it done."

That sort of thinking has been a driving force behind Jenzy. For example, in exchange for beta testing during the early iterations of the product in 2016 and 2017, Horner would offer free babysitting to participants. And when it came to networking, she knew where to find other like-minded individuals. The connection to Cornell as a whole and the school's field hockey alumnae channels have helped grease Jenzy's wheels.

"We love hiring interns and employees who were student-athletes, because we think they just bring such a great team-first mentality to a start-up and are really willing to wear so many hats," Horner said. "I would love to see more student-athletes get into entrepreneurship and start companies, because I think they're really well-equipped to do that. They have so much grit that would help them succeed." 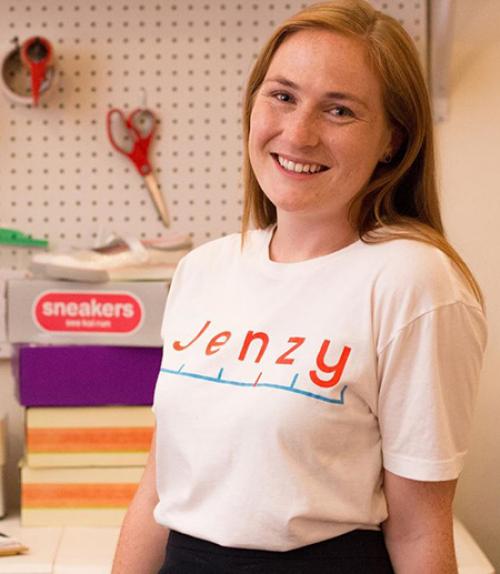