As childhood obesity creeps upward, Lui sought to understand pediatrician opinions on “nature prescriptions” to help young patients. She created a survey, and several chapters of the American Academy of Pediatrics distributed it. Lui found that 73 percent of pediatricians who responded had never heard of nature prescriptions, while 27 percent had seen references.

“We can use nature to improve children’s health,” said Lui. Playing outside is a great way for children to relieve stress, boost immunity, improve family dynamics and mend behavioral issues, she said.

The Rawlings Scholars program features a wide array of undergraduate research opportunities, and provides significant support to students who have strong academic potential and intellectual curiosity. About 200 students are enrolled in the program annually.

Alexis Wilson ’19 studied the effects of drought on deciduous trees in the Northeast. She learned that drought stress during the growing season kindled changes in leaf chemistry and stunted leaf-litter decomposition in certain tree species. The combined factors of drought, species and site impacted leaf-litter mass loss.

For four years, Ehab Ebeid ’19 studied transit systems and how to make them more efficient. Using the Metro transit system in Washington, D.C., Ebeid developed software – the bus automated vehicle location model – that uses archived GPS data to predict the commuter-congestion choke points on the roads around the city.

“Knowing this information, you can make real, positive interventions,” he said. For example, if it is taking too long to get people on or off the bus, systems can implement all-door boarding for certain stops, or having riders pay in advance at bus stop kiosks.

Ebeid added: “To relieve traffic congestion, there is technology where buses can interact with traffic lights to implement transit-signal priority – where the light stays green just a little longer. That’s one of many solutions.”

In his poster, Adam Riesenfeld ’19 examined “the boomerang effect” of visual advertising messages in a real-life campaign about a healthy diet, which featured unhealthy imagery. For example, in a campaign that suggested eaters “Cut the Junk,” the advertisement featured a photo of a glazed donut and a large hamburger.

“Health messages should focus less on creativity and more on theory based design,” he said. “Don’t dissuade people from an unhealthy behavior, but encourage them to engage in a healthy behavior.”

In other words, messages – including imagery – should offer the diet people should have, not an unhealthy diet, Riesenfeld said. “This is the power of positive visuals.”

This story orginially appeared in the Cornell Chronicle. 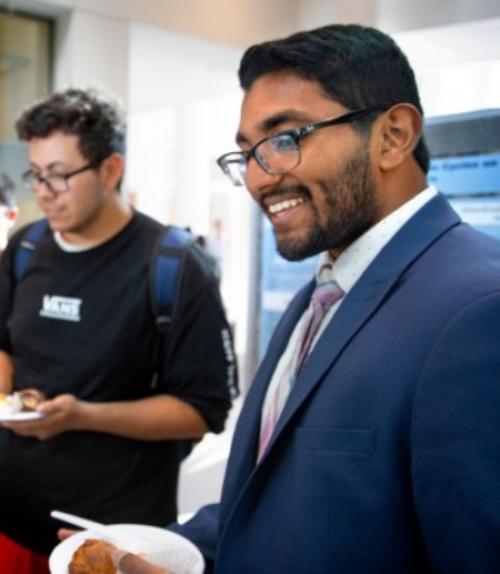